Here is my new painting, a scene taken in Tunisia from a hill at Carthage, overlooking the city of Tunis and the bay of Tunis. It is on a 36 x 24 inch canvas, and is in oil. 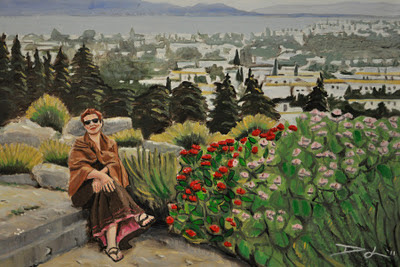 The pigments that I used are as follows:

Below are the notes I've taken while painting it:

For session 1, the under-painting, I went is with a neutral gray-brown, Van Dyke Brown. This is unlike my other under-paintings that use a warmer brown, like Transparent Oxide Brown. Originally, I was not going to do an under-painting at all. I was going to go straight in with color. However, after the under-drawing, I was having trouble telling my darks from my lights, so I thought a simple monochrome would help. I am pretty happy with it, though I think the figure gets lost a bit. That will change when the warmer colors of the figure will be put against the cooler colors of the vegetation.

Session 2 was another long session. I went from happy to frustrated. After painting all day, I scraped off a whole section of the painting. I was that unhappy with it. The part remaining I'm not totally happy either. Maybe there is a reason I don't do landscapes.

After some time to think about it a bit, now looking at the painting, the one thing that does seem to be working is the idea of atmospheric perspective. As things move to the horizon, they do seem cooler, and more faded. At least that works.

During session 3, I solved some of session 2's problems (sort of). I'm beginning to realize that this painting is going to be somewhat more abstract compared to my more representational portraits and still lifes. Maybe that is okay. Maybe I'm just resigned. I don't know.

During session 4, I focused mostly on the figure. One problem until now is that the figure never stood out because it is similar in value to the painting around it. However, now, the warmth of the figure differentiates it from the surrounding image which is quite cool. That was my goal, and I think it worked.

Session 5 might be it. It might be done. I'll give it a week and see if I want to make any changes. Then, I sign the damn thing.

If you want to check out the progress over time, use the links below: