"Hair of the Dog"

Here is my new painting, in oil, on a 24 by 30 inch canvas. It is a scene from a wine tasting room in Paso Robles, California. 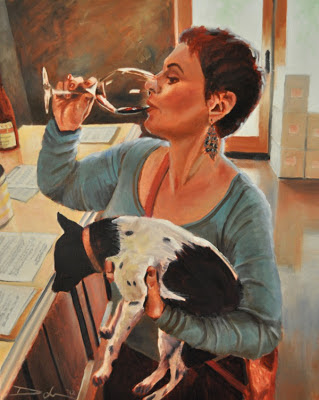 Here are the notes I've taken while painting it.

For session one, I started on the face of the figure and the dog. I chose these to paint first because one of my art instructors told me that you should do the most important things first in a painting. I struggled a bit with the face, because a woman's face should show soft features, and the pigment was showing some of the "grittiness" that can sometimes happen with transparent pigments. A fan brush solved those issues.

With Session 2, I finished the under-painting. Now I'm going to move in with opaque pigments.

Session four: Finally, some cooler colors. The blue of the shirt was a combination of cerulean blue, permanent green, cobalt blue, and titanium white. The black for the dog is a mixture of transparent oxide red, alizarin crimson, and ultramarine blue. I used titanium white mixed with the black I mixed up, and a little transparent oxide brown for the white areas of the dog. I used a fan brush dipped in solvent to make the transitions between the black and the white of the dog.

Session six was both successful and frustrating. Right away I nailed the floor, door, and boxes. I think they look great, along with subtle changes to the hair and highlights on the clothing. After that though I really struggled. First, with the purse, I kept laying in paint scraping it off and laying it is again. I finally settled on leaving the under-painting, but darkening up the shadows a bit. Second, I laid in the bottle, pushed it around, adding more and more paint until it was a muddy mess. I then scraped that off. I'm not sure, but I might leave that one the under-painting too. Finally, at the end of the session, I painted the table. That looks okay.

For session seven, I laid in the print on the paper, darkened the bottle a bit, and did a bit of touch up. One thing that was bothering me is that the bottle was at a different angle than the corner of the wall behind it. I moved the line of the wall to make them a bit closer in angle. Lastly, I tried to add slight darkened cores to the clothing as well as some slight cast shadows. Unfortunately, it did not do much except make the clothing look a little "dirty." It is going to be what it is going to be.

Here are links to the images showing the work in progress over time: