Here is my new painting, a self portrait of me playing my oud to my dogs. 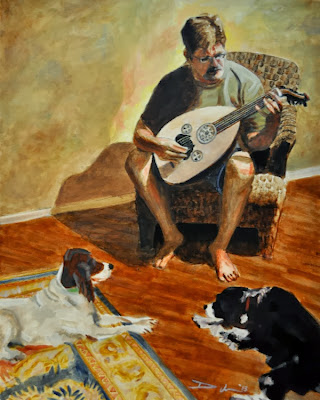 For session one, I started on the under-painting. I've been taught to always paint the most important things first, so I started with the face, and moved to the dogs. I used a mixture of transparent oxide brown cut with half again as much ultramarine blue. I wanted a neutral middle pigment balanced slightly toward warm.

For session two, I spent a lot of time working on the face. I broke my rule of using only transparents for the under-painting and broke out some whites. After the face, I did the chair and some shadows. I used subtle mixes of transparent oxide brown, ultramarine blue, and terra rosa to add nuances of warm and cool.

For session three, I worked on the oud, the wall, the floor, and added some color to the flesh tones. I tried something that I had not really done before. With transparent paint, sometimes it is hard to get a smooth tone. It can be rough, uneven, and sometimes gritty. I tried to mix some transparent white with my pigments where I did not want that unevenness. Transparent white is only semitransparent. It has some qualities of opaque paint but still lets what's underneath through. It was moderately successful.

Session four: I darkened up the overall painting with some glazes. I also did the rug. Finally, I added some strings to the oud. I did this by using a palette knife loaded with paint. I think the under-painting is done.

Session six, I did the dogs. In particular, the black dog, Murry, was painted witha mixture of transparent oxide red, alizarin crimson, and ultramarine blue as a mixed up black. The result was so black, though, that I had to add some to the darks in the rest of the painting so the dog did not stick out like a sore thumb.

Session seven, I worked on the back wall and the floor. I thought I was done, but now I notice a spot on the oud that needs some work. I'm going to sit on it a few days too and see if I see anything else.

Posted by David Larsen, fine artist at 4:30 AM No comments: 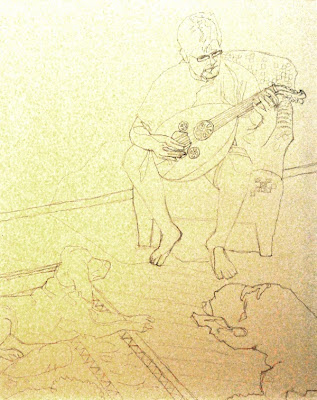 Posted by David Larsen, fine artist at 3:04 PM No comments:

Here are the paintings I made in a portrait class at the Drawing Studio. This class used the direct painting method, where I am more of a indirect painter, so it was a stretch for me. 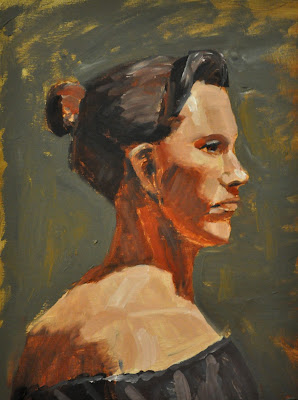 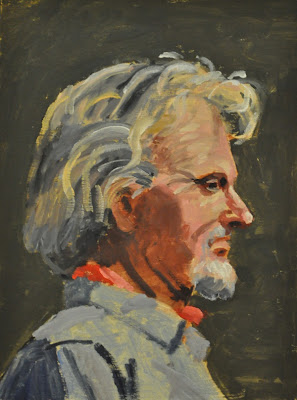 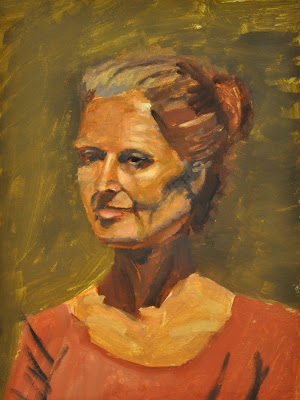 Posted by David Larsen, fine artist at 2:27 PM No comments:

Here is my newest painting, a scene in Seattle's Post Alley. 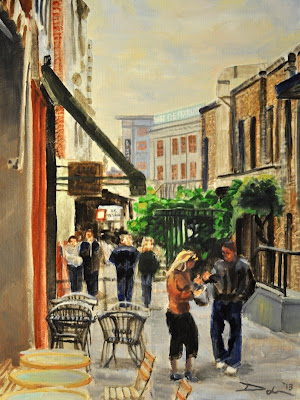 Session one was a marathon session where I finished the entire under-painting. I wanted to stay loose. I used nothing but transparent pigments to complete it, which included terra rosa, transparent oxide brown, van dyke brown, ultramarine blue, and terre verte.

Session two, I filled in the sky, sidewalk, tables and chairs, and other areas with opaque paint. I really struggled with the sky. At one point it was too warm, then too cool, then some rainbow mixture of the two. I finally settled with what I wanted, some warm yellow overlaid with cool blues.

Posted by David Larsen, fine artist at 7:43 PM No comments:

Here is the under-drawing for my new painting: 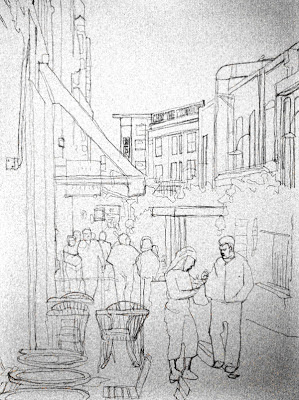 Posted by David Larsen, fine artist at 7:33 PM No comments:

These are from a plein air class I took at the Drawing Studio, where we went into the historic barrios in Tucson and painted. 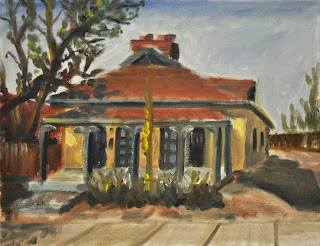 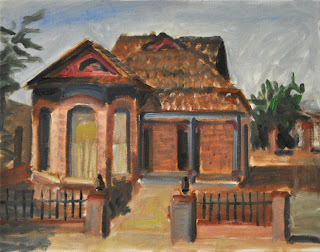 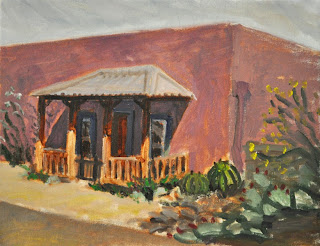 Posted by David Larsen, fine artist at 6:20 PM No comments:

"Hafla in the Outlands" 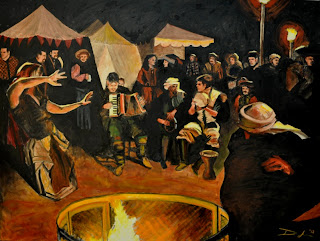 For session one, I started on the under-painting. Here I used a mixture of transparent oxide brown and ultramarine blue for the dark areas, and straight transparent oxide brown for the light areas. I started with the most important thing first, the accordion player. After that, I started filling in the dark areas, because there is so much of it. The under-painting will take a while to complete.

Session two, I started on the belly dancer. I added terra rosa to my palette of transparent pigments. The terra rosa really gives a warm glow to the flesh tones. I like this because they are supposed to be lit by fire. I think that that really works.

Session three: I filled is as much of the dark areas as I could. Should note that as a approached the torches, I used more transparent oxide brown, to give a warm glow to the dark areas.

For session four, I started on the drummers. Trying to get that right balance between my dark mixture, and the terra rosa was difficult. Some of it will have to be revisited.

Session six: the under-painting is done!

Session eight: It might be done. I'm going to sit on it for a bit.

Here are links to the images showing progress over time:

Here is the under-drawing for my latest painting. It is on a 48 x 36 inch canvas. Click to embiggen. 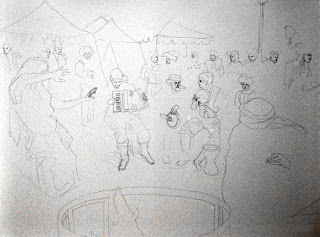 Posted by David Larsen, fine artist at 2:59 PM No comments:

Why does everyone give roses for Valentine's Day? I think people should give more sunflowers. Therefore, I give you my latest painting. 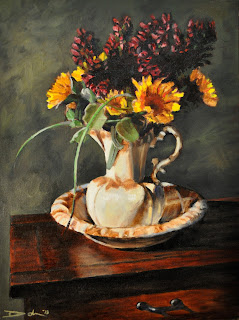 For session one, I completed the under-painting using nothing but transparent pigments: ultramarine blue, transparent oxide brown, terra rosa, transparent gold ochre, and alizarin crimson. So far, I'm pretty happy with it.

For session 2, I did two things. First, I did the pitcher and bowl. I tried to use a mixture of warm and coll pigments to give them a richness. Second, I did the background, which was a mixture of permanent green, transparent oxide brown, sap green, titanium white, and ultramarine blue. I tried to mix it up there too, to give it a richness.

For session three, I did many things. First, I did the greenery, using permanent green medium, sap green, transparent oxide brown, and titanium white. Second, I did the sunflowers. This was using cadmium yellow light, cadmium yellow deep, cadmium red, and transparent oxide brown. Finally, I fixed the small purple flowers using alizarin crimson, titanium white, cadmium red, and ultramarine blue. Oh, and let's not forget the reflections and highlights. I think the painting might be done. I will sit on it and see.

Here are links to images showing progress over time: